While some are fortunate enough to be getting their summer football fix in Austria at the moment watching what is left of our first team battling to dull nil-nil draws – I had to get mine at the slightly rougher surroundings of The Fairfax Plant Hire Stadium, Selby. 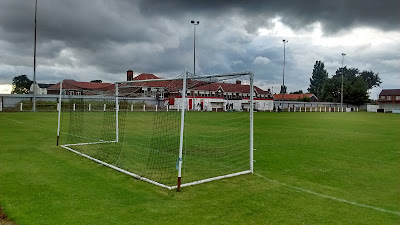 The ground is at the bottom of a street with the entrance next to what appears to be a scrapyard/second hand kayak store. There is a covered stand at one end, a bar with benched seating outside along one side and three small changing rooms at the other. It’s all a bit untidy, just like the pitch but it can be forgiven when it features a portakabin called “Shabba’s vintage programme shop”.

The ground is pretty well hidden. My parents have lived around the corner for the last three years and I didn’t even know it was there. Three balls went missing over the fence in the first half – one in a school, one in a garden and one into the leisure centre car park.

The leisure centre was rebuilt last year. They held a competition to rename it and I saw a local newspaper clipping announcing the winner as so-and-so of somewhere who had ingeniously suggested “Selby Leisure Centre”.

The line-up wasn’t overly familiar and featured several lads who are either U18 or new to the U21 squad with Will Aimson and Max Clark looking after them.

Aimson, who broke his leg while on loan at Tranmere last season, has looked clumsy when I’ve seen him previously but lead manfully from the back and headed everything. He showed really nice touches coming out of defence too.

It was the first time I’ve seen Taylor Tombides. The Aussie was released by West Ham last season and is the younger brother of former Hammer Dylan Tombides who died tragically after a battle with cancer last year. Taylor has pace to burn and runs well with the ball but gives possession away easily at times. He was unlucky not to score twice in the first half when he closed down the goalkeeper the first time and then a defender but couldn’t convert.

The stand out performer was Max Clark. Long before he cemented himself as the match winner, he impressed with a dominant midfield performance. He obviously thrived on the responsibility of looking after the young players and stood up to the rough style of the hosts who fancied intimidating the young Tigers. Clark took responsibility for the ball, moved easily through midfield and passed the ball well. He knows how the game works and lead others through it.

All of the youngsters stood up for themselves much better than they did the last time I saw them at Frickley but they laboured through the game, in truth. The opposition were very limited - particularly after a host of subs.

Max Clark opened the scoring mid-way through the second half when he drove at their defence, beat two men and lashed a left-footed shot across the keeper – who didn’t even move [0-1]. Jarrod Bowen was unlucky not to add a second after a really classy run but Taylor Tombides then did so with a run down the right and a scruffy finish beyond the keeper [0-2].

With practically the last kick of the game, Max Clark put the icing on the cake when he exchanged passes with Robbie McKenzie and curled a beauty from 25 yards into the far top corner [0-3]. I’d say it was worth the price of admission alone but it was only a fiver to get in and it was much better than that!

I enjoyed the trip to another quirky, scruffy little ground that I hadn’t been to before. The game was a physical test for the youngsters but they were rarely in trouble. I wondered before the game how much of the experience is for the physical test and how much is about “look where you’ll end up playing every week if you don’t apply yourself”.

The annual trip to Winterton wasn’t on the pre-season calendar this year, sadly. I did wonder if it was due to the dip in quality of their side in recent years. After tonight, I don’t think that can be the reason at all.
at July 28, 2015