Hull City have shed nine senior players since haplessly exiting the Premier League in May and are still expected to lose more....

The three out and out strikers in the squad, Nikica Jelavic, Abel Hernandez and Dame N’Doye, all made it clear to Steve Bruce  that they didn’t fancy a spell in the second tier about 4 minutes after the final whistle went in the 0-0 draw with Manchester United that sealed our fate.

Meanwhile Norwich City continue to pursue left sided all-rounder Robbie Brady and, now they have stopped taking the piss and started to talk real money, there is a very good chance that he will be the next one off down the M62 (Unless he goes over the Humber bridge and down the A15 but with all those speed cameras and the risk of getting stuck behind a tractor, I wouldn’t recommend it).

Hopefully in the background of this exodus, Steve Bruce and the higher ups at the club (if they’ve stopped sulking yet) realise that we need several reinforcements in midfield and at least three forwards. 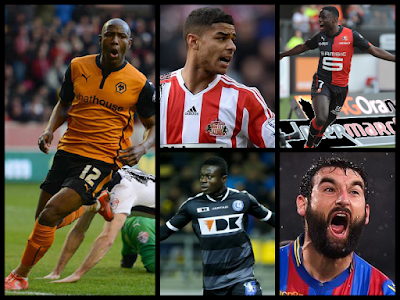 I’ve long been an admirer of the Chelsea youth product who made his reputation as the lynch-pin in a very good Brighton team under Gus Poyet. If I’d had anything to do with it – he’d have been the first signing Bruce made after out promotion in May 2013.

Bridcutt is a diminutive midfielder but isn’t one to shy away from the midfield battle. He has excellent positional sense and is a good organiser in front of the defence. His biggest strength is his composure when in possession of the ball. He plays neatly and quickly and both keeps the ball well and helps turn defence into attack quickly.

Bridcutt is believed to be available for transfer after Poyet left Sunderland last season as their new manager Dick Advocaat continues to bring in his “own” players. Sunderland will want a good chunk of the fee they paid Brighton back though.

Jedinak has been the driving force behind Crystal Palace’s success in recent year. He’s a big, tough Aussie who provides stature and aggression in midfield and has a winning attitude. Extremely useful in both boxes, he’s a real battler but has shown the quality on the ball required to be effective in the Premier League – and against big opponents.

Despite his success at Palace and being a fans favourite, rumours continue to persist that he may be expendable. The arrival of Yohan Cabaye suggests Alan Pardew has big plans to take the South Londoner swan divers on a level.

He doesn’t fit Steve Bruce’s plan to build a young, hungry team (if he even meant that) but he’d be the best midfielder in the Championship by far.

You should remember Simon as the little, sharp Nigerian winger who played against The Tigers for Trencin in those halcyon days of the Europa League last summer. He was linked with a move to England after those games with City and Spurs said to be interested but it never materialised.

Instead he moved to Belgians Gent in January and was part of the side that secured their first ever Jupiler League title. Two of his early appearances in Belgium came against our Europa League conquerors Sporting Lokeren. In just his 2nd appearance for Gent, he was sent off in a cup tie against Lokeren and in his 4th he bagged a hat-trick against the same opponents in the league.

Simon is a very quick, very agile winger with an eye for goal who had a very good technical upbringing in the Ajax academy. He has already been called up for Nigeria and is comfortable playing up front or as an out-and-out left winger. He may have only been at Gent for six months but a big bid will always tempt a Belgian side to sell.

Cameroon born French international Ntep is another player who has was linked with City in the distant past – long before he left Auxerre for Rennes last summer. He’s a very quick striker – and occasionally winger – who carries the ball well, links play nicely and has a reasonable (but unspectacular) goal scoring record.

He was amongst the top scored in Ligue 1 last season with nine goals and has a growing reputation which would possibly generate a fight for his signature. He is an “ouside the box” signing though who’d be available for similar money being talked about for players who’ve had one good season in the Championship.

He’s currently injured “for several weeks” which might be another black mark against him.

I’m not kidding you or myself – Afobe won’t come cheap and he won’t be easy to prise from Wolves – but he’d be worth it. He came through the youth system at Arsenal and featured for England at all youth levels and has long had a reputation as a promising striker.

He had half a dozen loan spells away from Arsenal and learnt something with each one. In the last year and a half, he’s started to turn promise into real quality at senior level and turned his impressive pace, power and movement into goals – and lots of them.

When Wolves picked him up for just £2m in January, I thought that might just be a steal and it has proved to be the case. According to Wikipedia he “was assigned the number 12 shirt, which was previously used by loanees Yannick Sagbo and Danny Graham.” Not even their stink could hold him back.

The outlay for Afobe would be pretty huge by Championship standards but I can’t see a downside. One successful season and that price will double. This looks a smart investment by anyone’s standards.
at July 17, 2015