What's next for Hull City after the sale of Jake Livermore?


The Hull City Jake Livermore joined in 2013 was a different club to the one he’s left this week. A club full of joy and optimism enjoying its second sojourn into the top flight of English football but the mention of an attempt to change the clubs name was like the puncture wound from a venomous snake that would spread poison through the place. 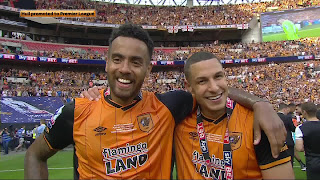 Livermore was long touted as a promising midfield prospect at Spurs and had briefly broken through at White Hart Lane leading to him receiving a single England Cap in 2012. He’d already enjoyed/endured loans with half the football league when he turned up at City on the eve of the 2013/14 season in a buy one, get one free deal with Tom Huddlestone who’d become the club’s record signing.

The pair anchored the City midfield, with Livermore near ever-present, as the club finished in its highest ever league position (16th – one above Jake’s new club) and lost out in the FA Cup Final to Arsenal. The sight of Livermore and Huddlestone squat, broken, on the Wembley turf will stay with me forever. Arsenal’s Kieran Gibbs attempted to console them in vain. It had been a tremendous spell for Livermore. Highlighted by an opening goal in a 3-1 win over Liverpool at the KC, a fantastice strike against his former club in a game Gaston Ramirez ruined and his infamous “smash up an expensive camera” goal celebration at the Hawthorns.

Steve Bruce signed Jake up permanently for around £8m that summer but the following season was a constant struggle for the club. While the attempt to rebrand us to “Hull Tigers” had failed, the application and the spiteful words of Assem Allam had split the fanbase. The club’s first ever European campaign ended before the season was a month old and we surrendered our Premier League place without so much as a whimper. Unbeknown to most, Jake Livermore had suffered a personal tragedy following the FA Cup Final and in trying to deal with it fell into a state of depression and self-destructive behaviour that led to a failed drug test after the 2-0 win over Crystal Palace in April 2015.

Livermore was subsequently suspended by the club and to those on the outside – it looked like his career was in serious jeopardy. Eventually though, the whole sad story came to light and the Football Association accepted Livermore’s mitigating circumstances and allowed him to return to playing. He resumed his career at Hull City and despite a trying year in the Championship, helped the club to promotion via the play-off final. On the final day of the regular season, he bagged a brace in a demolition of Rotherham at the KC before he proudly carried his new baby around the ground afterwards. I don’t think anyone has ever been more pleased for a footballer than the hull City fans in attendance were that day.

After another tumultuous half a season in the Premier League, Livermore has been allowed to leave City for West Brom for a fee of around £10m so we’re told. It’s a strange decision – to let your midfield anchor (who has also been a god send at centre half this season) leave when the threat of relegation hangs over the club. However, it’s clear from the months activity, replacing Mike Phelan with Marco Silva, that the Allams are having a go at keeping City up and are doing so on a limited budget. If the only way for Marco Silva to be able to bring in the 3/4/5/6 players the club clearly needs is to sacrifice a saleable asset then it’s probably a risk worth taking.

Ehab Allam has invited ridicule with the sale having told the Yorkshire Post exclusively only this week that we are not a “selling club”. And generally, Ehab Allam deserves any ridicule that comes his way because he is a first rate moron with an ego he never earned but his father paid for. But assuming Livermore is the only player to leave in the January transfer window and the club fight off interest in the likes of Robert Snodgrass, Andy Robertson and Harry Maguire – then Ehab Allam is right.

For their many, many faults, the Allams have generally done right by Hull City in the transfer market. They backed Steve Bruce to the hilt, many times. After selling Livermore, the club’s net spend under Allam ownership is £53m. Take away the sale of guys the manager didn’t want and the need to sell wantaway players following relegation and there are three sales. Shane Long, who was sold for “crazy” money and to be replaced immediately by Abel Hernandez. Mo Diame whose contractual situation was the result of utter buffoonery from Allam Junior. And then Livermore.

It is absolutely vital that Ehab Allam’s words are proven true now. The club needs to invest the money received for Livermore in new players for Marco Silva and they need to keep hold of everyone else in the squad (unless they explicitly ask to leave).

In amongst the poisonous atmosphere at the club caused most particularly by the aforementioned name change application and subsequent removal of the clubs name from its communication and most spitefully by the removal of disabled, child and OAP concessions and the forcing out of Steve Bruce as manager – there has been a moment of optimism following Marco Silva’s arrival. It seems the best way out of the current situation is for the club to stay in the Premier League to allow the Allams to sell it. If that is to happen then Ehab Allam needs to be as good as his word.
at January 20, 2017 2 comments: