Hull City: Who spectacularly turned around their Hull City career?

When I read that Moussa Sissoko had been named Spurs' player of the season, I got to thinking about players who've turned around their Hull City career spectacularly.

I'll start with the first two players who immediately came to my mind and then look at some suggestions from my good friends on Twitter. 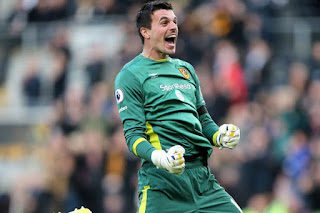 Eldin Jakupovic - The Jak is the poster boy for this question. His appearances for City were sporadic after he arrived in 2012. He spent time on loan at Leyton Orient and until he replaced Allan McGregor for the play-off semi-final at Derby in 2016, everyone's lasting memory of him in black and amber, well, Green, was dropping a bollock at home to Sheffield Wednesday and going off "injured". Even after that fantastic win at Pride Park in the play-offs, Steve Bruce intimated that anyone could have played in goal and Eldin disappeared again. The following season, he came back with a vengeance and eventually fought off David Marshall to be City's undisputed number one during some great times under the management of Marco Silva. Typically, he then cleared off at the end of the season. They all do.

Paul McShane - The ginger ninja had a pretty successful loan spell at City in 2008/09 leading to him returning the following year as part of the (dreadful) deal that took Michael Turner to Sunderland. This was less successful - understatement - as City were relegated and then struggled in the Championship and Macca was shipped off to Barnsley and then Palace on loan. His prospects didn't look great after City appointed Bruce, who was the Sunderland manager who let him go, but he became a cult hero as promotion was acheived in 2012/13, spawned the "Don't Sell McShane" song and scored on that fateful day against Cardiff. He was let go after relegation in 2015 and I'm still waiting for the riot.

Kevin Stewart - Typo aside, Stewart is a great shout. I won't go into him to much as I just wrote a lot in the end of season review but Stewart had an outstanding middle of last season after everyone had written him off as a complete waste of money. With the squad set to change again this summer, he can be vital next year.

Damien Delaney - Several suggested Delaney. I'm not fully on board with this one on the basis that Delaney was never a poor player. He was a young player who had some inconsistent performances after uprooting from Leicester to Hull and having to adapt to playing left-back in the bottom division - a real shitkickers league back then. Only morons (call them boo boys if you like) heckled him. Everyone else could see it for what it was and his City career went from strength to strength.

I'd add David Meyler and Markus Henriksen, amongst others, to that category. Unfairly targetted by morons isn't the same as career turnaround in my book.

Dean Windass - A very interesting suggestion. Windass was famously let go by City in the late 80s and eventually re-signed by Terry Dolan after starring for North Ferriby in non-league. Deano didn't so much turn around his City career but his entire career and would go on to bigger and better things, the most famous being with City in his third (or is it officially his fourth?) spell at the club in 2008.

Billy Whitehurst - Another striker who had multiple spells with City. Whitehurst joined from non-league Mexborough in 1980 and was instantly part of a team relegated from the third division. Though he played plenty of games in the bottom division, his goal record was patchy and he wasn't overly popular but he'd improve immeasurably - as would City - and was a crucial part of two promotions. He left for Newcastle but eventually returned and remains one of the most popular Tigers ever.

Leon Cort and Michael Turner - I've saved these two for last and grouped them together as they're intrinsically linked. Cort joined a newly promoted City side on a free transfer from Southend and had a difficult start to life under Peter Taylor. He was a gangly, unwealdy player who didn't always look in control of his legs and brought the ball out of defence like Franco Baresi('s Grandad) but he grew into the team, chipped in with plenty of goals and was absolutely superb the following season - City's first in the Championship. He moved to Palace, bought by Peter Taylor, for £1.25m and was replaced by Michael Turner.

Phil Parkinson signed Turner from Brentford, then of League One, and despite his physical similarities to Cort, his performances were of a much poorer standard. When Phil Brown replaced Parkinson, he initially dropped Turner but things turned around when he was terrific in a 0-0 draw at Elland Road and he never looked back (although I'm still not sure why he didn't start the first game of the 2007/08 season). By the time he left in 2009, City were a Premier League team, he was a huge reason why and he was our best and most valuable player by a mile. It still stings that we got next to nothing for him.
https://twitter.com/HullCityAFCAus/status/1133502785394110464
at May 31, 2019 No comments: