Dropping into the Championship has one major upside for Hull City – it opens up the Premier League loan market in a big way.

Steve Bruce has expressed his desire to build a “young, fit, hungry” squad and with funds likely to be limited, he may have to supplement that squad with some astute additions. 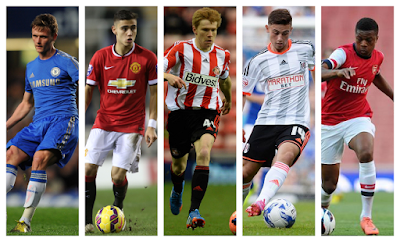 Several of last season’s promotion chasers in the Championship benefited from taking young top flight players on a temporary basis. Derby County added Jordan Ibe from Liverpool and Tom Ince. Middlesbrough took the prolific Patrick Bamford and Tomas Kalas from Chelsea. Brentford and Ipswich also made good use of the rather lax attitude to loans at this level.

Bruce is no stranger to the loan market having used it very affectively during The Tigers promotion season of 2012/13 to bring in David Meyler, Robbie Brady and Ahmed Elmohamady – all of whom became permanent additions.

Here are five young players who are ready to have a good crack at football’s most attritional league. I’ve left out Manchester United’s James Wilson because Bruce has already expressed his desire to take the young striker and there’s a good chance he’ll actually make a Premier League move.

Akpom has grown up in the Arsenal system since the age of six and has already taken in loan spells at Brentford, Coventry and Nottingham Forest. Despite those moves and some fleeting appearances for his parent club – he’s yet to score a senior goal.

That completely belies his record in youth football at both club and International level where his record is superb.

Akpom is a powerful and athletic striker whose size and ability has seen him play U18 football since the age of 15 and make the Arsenal first team squad at 17.

He’s the sort of player clubs at our level will always fall over themselves to take because at some point it’s going to click and he’ll turn his promise into senior goals. His former team mate Benik Afobe is testament to that theory.

Hampshire born Swift appears to be the only player in English football Southampton’s academy have missed out on. He’s come up through the Chelsea academy and is a regular at all England youth levels.

He impressed last season on loan at Swindon playing in an advanced midfield role and looks ready to make the next step up. Swift is a creative midfield player who can commit defenders but is still slight in build and has decision making issues.

This one would have the potential to go a bit John Bostock but he’s certainly a very talented player who’d grow as the season goes on – especially with players like Tom Huddlestone to guide him.

Sunderland’s flame-haired winger would replenish The Tigers depleted Ginger quota after a summer of departures!

Watmore joined the Mackems from Altrincham in 2013 and has been a revelation in U21 football and impressed for England U20’s at the Toulon Tounament in May.

He’s enthusiastic and strong, covers the ground quickly and has an eye for goal. He’s not your typical young player either. He continued to study for his degree after joining Sunderland and revealed recently that he still buys his own boots!

Roberts has just joined Manchester City from Fulham for about £11m imminently and I'm sure clubs are already queuing up to take him on loan.

Fulham might well have asked for him back on loan as part of the transfer but if that isn’t written into the contract then every team in the Championship, and maybe some of the bottom-rung Premier League sides will be looking to take him.

Roberts is an extremely talented forward who can play wide or off the front player. He’s very small but quick and brave and is a very astute signing for Man City as an eventual successor to David Silva.

We’ve yet to see any real sign of Bruce’s fabled links with United. Only Robbie Brady has arrived from Old Trafford during his reign and that was a signing Nigel Pearson and Nick Barmby had already established.

Pereira is a second generation footballer who was born in Belgium and represented their youth sides before switching allegiance to Brazil – the country his father represented internationally.

He joined United from PSV and has excelled in the U21 league as an influential, mobile, creative midfield player. Despite his age, he craves first team football and feels ready to make the step up.

He’s ambitious, impatient and arrogant and is already desperate to shine at Old Trafford so the chances of him going out to what he will see as a lesser club may be slim.
at July 19, 2015