If pre-season friendlies mean anything – I’ve got some pretty good news for Hull City fans.

The Tigers easily outclassed a decent League One outfit in Chesterfield, several players looked sharp after a mediocre season and the youngsters brought in to round out the squad showed plenty of promise. 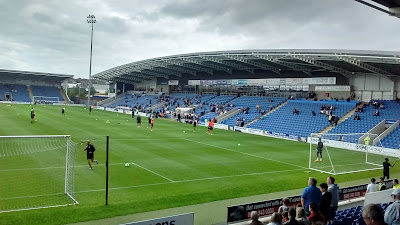 Reading too much into friendly matches is a mug’s game, of course, but it was still nice to see City play with a bit of swagger after a wretched few months on and off the pitch.

The dearth of midfielders was obvious by the selection in the absence of Huddlestone, for unknown reasons, Livermore, Diame and Snodgrass. As such Harry Maguire and Robbie Brady were used alongside Meyler.

Maguire was the best player in black and amber in the first period and looked comfortable protecting the back three and stepping out with the ball. Only once was his lack of pace exposed. Brady didn’t exactly shine. It’d be unfair to pick on him because he’s leaving and I really like him so I’ll just pick on him because he was rubbish. He pranced and postured, failed to find a pass, looked indecisive and hit some awful set pieces.

Chesterfield took the lead after a pretty even twenty minutes or so. Robertson was caught out on the left but recovered to divert Darikwa’s cross goalward and McGregor tipped over. They took the corner short and we were caught seriously napping, Brady the most guilty, and the cross found Evatt completely unmarked to head home [1-0]. If there’s a negative from pre-season so far, it’s conceding from corners twice.

The home side should have gone further in front when Sam Clucas failed to connect with another Darikwa cross eight yards out. The full back showed impressive pace to skin Andy Robertson again. That provided a wake-up call for the Tigers who’d been content to stroll around to that point, playing neatly but with little pace.

Sone Aluko just failed to connect with a very good Elmohamady cross before he picked the ball up thirty yards out and lashed in a wicked, dipping shot that Tommy Lee had to push over. From the resulting deep Brady corner, Harry Maguire towered above his marker and headed home [1-1].

City absolutely dominated the second half. The shape was much better - they exploited gaps in the wide areas with consummate ease and created half a dozen good chances. Meyler was the pick of the players as he picked up every ball in midfield and sprayed it around neatly. He was ably assisted by young Matty Dixon who was tremendous and showed great vision and composure on the ball.

Dixon had been denied by Tommy Lee and Aluko by a late offside flag by the time Robertson gave City the lead. He exploited acres of space on the left to latch onto Dixon’s ball over the top and finished brilliantly across the keeper from a narrow angle [1-2]. He got in again moments later but the keeper grabbed his low cross and then Meyler shot wide from an almost identical position to the second goal after making a fine run from deep.

There were masses of substitutions that fortunately ref Craig Pawson didn’t add time on for otherwise we’d still be playing tomorrow. They didn’t interrupt City’s rhythm and they continued to move the ball well and find gaps around the box. Sone Aluko was particularly bright and continued to get on the ball despite being the victim of at least four really crude challenges.

Calaum Jahraldo-Martin, who produced another sprightly cameo, wrapped the game up for City. He chipped the ball into an empty net after Elmohamady burst through, nicked the ball ahead of the keeper and had the presence of mind to find CJM when most around him were appealing for a penalty [1-3]. The City followers responded with a humourous chant of “You’re getting mauled by flamingos”.

Brian Lenihan just failed to add the icing on the cake when he volleyed over Jahraldo-Martin’s superb cross and the ref decided he wanted to get home early. Dame N’Doye, of all people, ensured all of his teammates approached the away end and showed their gratitude to the traveling fans.

I enjoyed my second visit to the Proact Stadium (both friendlies though so not accepted by some ground tick nerds!). Chesterfield are a tidy side with some good players – particularly the pacy right-back Darikwa and the lively and intelligent forward Sam Clucas. It’s a nice place to watch football. They do send the players out to “I predict a riot” by the bloody awful Kaizer Cheifs though and the big screen in the corner announces every throw-in with a big sign that says “throw in” so I’m not sure I could stomach it every week. Not that its an option.

If Steve Bruce could take anything from the game it would be the fact that his side looked far more fluent with a back four and two wingers and the centre halves looked particularly comfortable with the system. The back three seemed to encourage more passes sideways and backwards and the lack of permanent width meant that once we got the ball into the final third, moves broke down because of a lack of options. Hopefully we’ll see more of it.

It would also be nice to see more of the young players who are making such an impression at the moment. Dixon and Jahraldo-Martin in particular are ready for a tougher test. Steve Bruce obviously wants to reinforce his squad with new signings. When he does though, he needs to ensure he doesn’t completely cut off the development pathway to these boys who are showing some real promise.
at July 21, 2015