It was nice to see Hull City take to the field at the Chadwick Stadium to face North Ferriby United for the Billy Bly trophy after all – for most of pre-season it didn’t appear that it would happen. 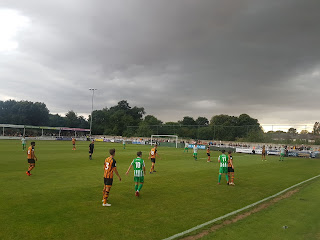 The game against Ferriby used to be the curtain raiser for pre-season and is always a great chance to see the players up close in a low-key environment. It’s a huge help to a lovely local club too. Sadly, it’s been eroded somewhat in reason years with City splitting the squad for the game and then sending only the U23s. Tonight saw a strongish mix of seniors and U23s take to the field and the rest of the squad in attendance to sign autographs and take pictures with delighted young fans. As the heart has been ripped out of club in recent years, it’s nice to be reminded of the joy the players and the club bring to youngsters who idolise them. Now sort out them concessions, City.

City bossed the first half, kicking towards the Allotment End as dark clouds rolled in from the west threatening a downpour that never really came, but created few clear chances for the first half hour. Johnny Saltmer, one of several former City youngsters in the Ferriby ranks, saved well from a Jon Toral pot-shot and just beat Fraizer Campbell to an underhit James Piercy backpass. Elliott Holmes jinked in from the right wing but Ben Leyland produced a great block. Saltmer saved from David Milinkovic but didn’t appear to know much about it and Adam Curry headed the resulting corner down and up onto the crossbar.

At the other end, James Nicholls headed Adam Bolder’s corner onto the top of the net in a rare foray forward for the Villagers. Milinkovic, who appears as frustrating as Kamil Grosicki with flashes of brilliance followed by moments of clumsiness then shot wide after exchanging passes with Brandon Fleming before outpacing Dan Nicholls, producing a lovely bit of skill on the bye-line and dinking a cross up for Toral to smash the bar with an overhead kick. The undisputed highlight of a mediocre half.

The second half started sluggishly for The Tigers and particularly for Kevin Stewart who was muscled off the ball by diminutive former City junior Luke Lofts who played in Jordan Harrison but his cross evaded everyone. Lofts, who was very impressive in midfield for the hosts then robbed Stewart again. I really want Stewart to come good and there is clearly a player in there somewhere but it’s terrifying that we’re watching him in pre-season against a side five divisions below City and he’s still getting caught on the ball. He picked up some useful second balls in the first half but generally didn’t impact a game he ought to be running.

Toral, who was probably the pick of the senior City players along with MacDonald, then slid in Campbell who went through on the right and somehow bobbled his shot wide of the post. Campbell then met a brilliantly whipped cross from Fleming but it went straight at Saltmer. Sub Jack Smith made an excellent block to deny Toral who then hit another overhead kick that went wide. Tyler Hamilton replaced Toral and, unconnected, City finally found a breakthrough. Fleming marauded brilliantly on the left and tricked his way inside Smith who fouled him. Milinkovic whipped in the resulting free-kick and Campbell flicked it in from around the near post [0-1].

Daniel Batty replaced Stewart and Billy Chadwick came on for Campbell either side of the couple of moments that decided the game. Dan Nicholls headed a Ferriby corner inches over the bad with George Long stranded and complaining that he was held leaving the goal open. At the other end Milinkovic again races away from Ferriby’s defence and though his cross evaded Campbell, Elliott Holmes arrived to smash it home beyond the far post [0-2]. It was a tidy finish and a nice moment for Holmes who is a lovely little player.

Negatives: Stewart’s deficiencies have been described. Campbell still looks half a yard short of his best and missed chances he’d have buried once upon a time. Jackson Irvine was kitted out but had to go home ill. That’s a huge shame.

Positives: Brandon Fleming was the pick for City with his reading of the play, calm use of the ball and quality in the final third. MacDonald, McKenzie and Curry were very solid and MacDonald seemed to relish being handed the “you hit diagonals” role from Michael Dawson. Milinkovic showed a lot of ability in patches, Toral looked sharp and Holmes deserved his goal. The relationship between fans and players was lovely to see and, hopefully, North Ferriby made a few quid out of the game too.
at July 30, 2018