The Tigers look set to win the “race” to sign German striker Nick Proschwitz. Steve Bruce confirmed his interest in the SC Paderborn 07 man last week and things have moved quickly as Proschwitz flew into the teams training camp in Portugal yesterday to discuss a move.

Proschwitz is 25 years old, stands six feet four inches tall and scored seventeen goals in Bundesliga 2 last season. Hull City have been crying out for a bigger forward for the past two seasons and on the face of it, he appears to fit the bill. His 2011/12 statistics will tell you that he competes well in the air, he creates chances for other players and that he’s capable of taking a chance when it comes his way. Steve Bruce likes to play with wide players and a traditional front pair so a bigger striker would have been on his agenda as soon as he assessed the existing squad. I know some Hull City fans will be nervous of the terms “target man” or “big striker” or “German Peter Crouch” but those fears will hopefully prove unfounded. Norwich and Southampton have both won promotion in the past two seasons playing attractive, attacking football whilst having a large front player who scores goals but also links up with the midfield to hold up the ball and bring other players into play. 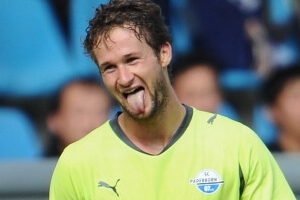 Proschwitz has a largely unimpressive CV. He played junior football in Germany before moving to Hannover and playing for their reserve team in the lower leagues. He moved onto Vaduz in Liechtenstein and then Thun in Switzerland. A reasonable season with Thun saw him sign a 3-year deal with Lucerne but moved on quickly after a change of coach and signed for Paderborn in 2011. He had a terrific 2011/12 season which brought him to the attention of some big clubs at home and abroad. Kaiserslauten, Bremen, Moenchengladbach and FC Basle were all linked with the player during the course of the season. In reality, the only firm interest came from The Tigers and newly promoted Bundesliga outfit Greuther Fürth. Proschwitz has stated that it is his “dream to play in the Bundesliga” which is to be expected from a German who has wandered around Europe trying to make the big time. Recent reports suggested that Proschwitz was very keen on a move to Fürth. These reports came out before Hull City’s interest became clear so don’t really affect the chances of The Tigers signing the player.

If you asked yourself why a player who turn down his “dream” move to come and play in England’s second tier in a city he’s probably never heard of then the answer should be obvious: Money. The financial strength of the German league is well documented but German clubs aren’t all cash rich. They are stable because they don’t pay massive transfer fees, they don’t overstretch on wages and they don’t gamble the club’s future on a season or two in the Bundesliga or the Champions League. Aside from Bayern Munich and perhaps Borussia Dortmund, most German clubs pick up players from lesser leagues for small fees, look to sell on the player for a profit and then replace them from source. For instance, Freiburg picked up Pappis Demba Cisse from Metz for €1.6m and sold him to Newcastle for £8m. By English Premier League standards, £8m is still cheap and Newcastle could make a huge profit themselves but probably not the eight times their investment that Freiburg pocketed. 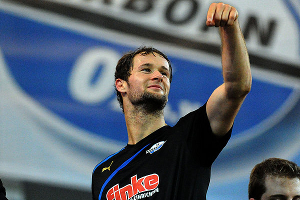 The media reports have suggested Hull City will pay £2m for Proschwitz, which equates to around €2.5m. The SC Paderborn fans are overjoyed at this news. Reports in Germany suggest the asking price was €1.3m which Greuther Fürth were looking to negotiate. Lucerne are due 30% of any fee Paderborn receive for Proschwitz so if he does come to Hull for £2m, Paderborn would still earn more than if they sold him domestically. One Paderborn fan excitedly stated that the club could pay €1m off their debt, put €250k into their youth system and still buy two good players with the remainder!

When news of the reported £2m fee broke on July 12th, most Hull City fans were cautious anyway. The club has struggled financially recently and that was far from the first time. Spending £2m on a proven striker would fill most with joy but on an unproven foreign player it looks a big risk. It’s not a risk Steve Bruce will be scared to take though. His transfer record may be hit and miss but he has a good record of taking unknown foreign players for fees that appear large and getting the best out of them. In several cases the club has made a good profit on the player too. The Tiger Nation will have to put its hands together and pray that Nick Proschwitz, if he arrives, is the next Wilson Palacios or Antonio Valancia and not the next Marcos Angeleri or Ji Dong-Won.
at July 13, 2012