Often pre-season friendlies end a long football-less summer but despite the fact that Hull City haven’t played for 79 days, this years have come around quickly. In part due to the excellent European Championships and in part due to the fiasco of a management situation, football and Hull City have been at the forefront of our thinking for most of those 79 days.

Often pre-season friendlies raise excitement at the thought of seeing a raft of summer signings or trialists but this year’s arrived with The Tigers having made just one signing. While the only trialist on display was the new manager’s son who has just been released by L**ds United.

Often pre-season friendlies are dour fitness exercises featuring players who are easing themselves back into football after a break and who are keen not to pick up injuries before the real stuff starts. Unfortunately, this one proved to be true. The only real plus point from the evening being that despite the sky changing from blue to grey to black to pink, it didn’t rain.
Steve Bruce chose to watch his first match in charge of Hull City from the touchline. Ordinarily the manager watches the Ferriby friendly from the stands but Bruce was on the line in his tracksuit keeping a close eye on things. The team was a familiar one:

Working out the formation was a conundrum. Cameron Stewart played as an out-and-out right winger, Koren played behind McLean and Fryatt and Cairney and Evans played in the middle. Joe Dudgeon patrolled the whole left flank. Andy Dawson, Paul McKenna, Liam Rosenior and Jack Hobbs watched from the clubhouse roof while the rest of the senior squad were subs, along with Alex Bruce. I’m not sure if he counts as a trialist or if we’re genuinely just doing him a favour but if you were at Church Road tonight then you’ve seen him turn out for Hull City.

The first half was pretty dire, even by pre-season standards. The Tigers failed to create anything resembling a good opportunity for half an hour. McLean, Koren and Dudgeon all shot wide with pot shots, Dudge coming the closest hitting the side netting. Dudgeon was probably the pick of the players in the first half, proving to be a good outlet on the left hand side and putting in his usual tireless shift. Most of the others looked rusty with a high rate of hefty touches and sloppy passes. The major excitement of the half came from a Ferriby corner. Jakupovic ventured into the crowd, tried to punch but diverted the ball backwards where Gary Bradshaw, sharp as ever, headed goal-wards but found James Chester guarding the line. Bradshaw hit a tremendous dipping volley in the first half and a super left-footed drive in the second which fell a couple of feet high and wide respectively. He’s been a terrific servant to North Ferriby but his football career has been a massive waste overall.

The Tigers had a couple of minor scares as Chester and Cairney stayed down after heavy clashes but everyone else reached half time in good shape. Just before the break Fryatt missed the best City chance of the half when he latched onto a smart Koren flick and then held onto the ball too long allowing Pecora to smother. We’ve seen that one before. The half time entertainment was provided by Alex Bruce’s girlfriend. Thank heavens for mobile internet.

Olofinjana replaced Evans at half time. Perhaps precautionary? Oily doesn’t change. His style’s languid, his best touches are impressive and the rest are unimpressive. Ferriby took the lead soon after. I’m not linking the two events but you can if you wish. Jack Muldoon, who scored on his debut against Barton Town at the weekend, pounced on a loose ball in the penalty box [1-0]. In a competitive game you’d say it was exactly what the Tigers deserved.

Slightly embarrassed by conceding, City stepped up a gear. Matt Fryatt raced clear and lifted the ball over Pecora and also the crossbar. Shortly after a neat move released Stewart on the right, he delivered by far the best cross he’s ever put in for the Tigers and Aaron McLean rose to head home powerfully from close range at the near post [1-1]. Stewart had a quiet game, as he often did after Xmas last season, but I’d take a quiet 89 minutes if he delivers with this quality.

Alex Bruce and Jay Simpson replaced Liam Cooper and Robert Koren. Simpson looked lively and ran in behind on the left, giving Ferriby something to think about. I’m not convinced Alex Bruce touched the ball. Danny East then replaced Paul McShane whose final act was to hit a ferocious shot inches over from a cleared City corner. McShane has grown his hair out and is sporting a Patrick Berger hair band. He looks a right pillock. Well more of a pillock than usual.

Friendly games usually lose their rhythm with a raft of second half substitutes (Bradley on for Chester next) but this one had been so dull that it actually improved and as Ferriby tired, City took control. Fryatt danced into the penalty area and was tripped. He got up and tucked away the penalty himself (See Video), despite Tom Cairney getting ideas above his station [1-2]. It was to be his last kick as he left the field for Cullen. Conor Townsend, loaned out to Grimsby Town last season, replaced McLean as the last change. City attacked at will in the last quarter of an hour and Pecora pushed Simpson’s shot onto the bar and Cullen hit a post either side of the Tigers’ third goal. Cairney, who slid in Simpson earlier with a lovely pass, dinked the ball over the top for Townsend on the left. His looping cross was scuffed on the volley by Cullen but found Simpson who controlled, used the defender to shield the ball from the keeper’s view and rolled it into the bottom corner [1-3]. 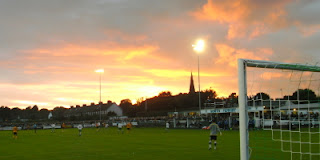 The Tigers ran out 3-1 winners, a slightly flattering score line, and retain the Billy Bly Memorial Cup. It wasn’t a convincing display but that’s only ever a bonus at this point in pre-season. It’ll be 2 or 3 more games before we start to see Bruce’s influence on our play and garner any real clues as to what our system and style of play will be.

The obvious positive was that three strikers scored and we avoided injuries. Jakupovic settled well and communicated well with the defence. He had a couple of dodgy moments from corners but is quick off his line, looks to distribute quickly and is decisive at least. We didn’t learn a whole lot about the other players. No-one has turned into Lionel Messi over the summer and no-one has sunk to Chris Lee’s level either. Jay Simpson looked sharp, Joe Dudgeon impressed on the left and James Chester came out of defence as brilliantly as ever. Otherwise it was very much the same City as it was 79 days ago.
at July 16, 2012