With just one working day left of the transfer window, here's a round-up of the past weeks news, rumours, denials and outright lies! 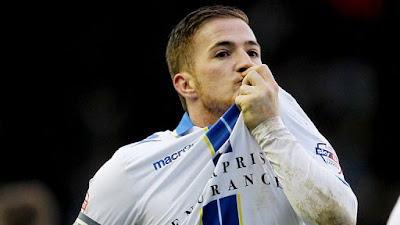 Are Hull City about to pull one out of the hat as the transfer window draws to a close? I doubt it but Simon Jones of the Daily Mail has suggested that Derby County and The Tigers are interested in Fulham's Ross McCormack who looked set for a big money move to Middlesbrough before that fell through this week. This one would be a hell of an investment - at least £9m - and City have shown no signs of spending anything significant this month.

One player definitely not joining City is Patrick Bamford. He completed a loan move from Chelsea to Norwich last night - as expected.

According to the Daily Mail, six Championship clubs want to take forward Tom Lawrence on loan from Leicester City. The Wales international is currently being borrowed by Blackburn but that deal ends this month. The paper says City, Ipswich, Burnley, Cardiff, Forest and Leeds want to take him for the rest of the season.

Amongst all the excitement that 16-year-old Josh Tymon will make his Tigers' debut this weekend, you may have missed the news that his U21 teammate Harvey Rodgers is set for a loan move to Luton. That will be a good test for the talented young centre half.

Rival news: It broke last night that title rivals Middlesbrough have had a £9m bid accepted for prolific Blackburn striker Jordan Rhodes. The deal will include add-ons of up to £11m or £13m depending on who you believe.

You wait all transfer window for a signing and then two com along at once? The Hull Daily Mail report that Manchester United midfielder Nick Powell will be joining City on loan before Monday's transfer deadline.

The paper point out that Powell's United contract runs out in the summer. So this could be the first step towards a permanent deal which would make much more sense at this time.

RUBBISH!: Steve Bruce isn't impressed with the "Abel Hernandez to Arsenal" rumour, telling his pre-match presser: "Abel's done very very well and of course you hear all the speculation, but some of it, unfortunately I have to say the media these days is they do talk some rubbish. I think I have been chasing 45 players in the last month. And as I have said repeatedly, no matter who it is, who they are coming for, it would be crazy to start dismantling the team now. I am sure Arsene Wenger understands that as far as we are concerned with Abel. And I spoke to his staff only a couple of days ago about a loan signing, so I don't think there's any substance in that one"

The Tigers tried to sign Legia Warsaw and Slovakia keeper Dusan Kuciak in the summer and according to polish journalist Michal Kolodziejczyk, they've returned to do the deal in this window. The news coming out of Poland suggested it's a done deal but local journos corroborated the story but stressed it's not done yet. The fee is said to be 300,000 Euro or about £227k.

If you thought you'd heard the most ridiculous rumour of this transfer window - think again. The Italian website tuttomercatoweb, who some rate for their news but seem to be rubbish when it comes to Hull City, have run an exclusive suggesting Arsenal will bid for Abel Hernandez in the summer. I love Abel (now) but there is no way he's at that level. Still, if they're offering £30 million...

Rival news: Middlesbrough are desperate to spend some money this month. Getting nowhere with Ross McCormack, seemingly, they're now linked with an £11m bid for Blackburn's Jordan Rhodes.

The January transfer window thus far has been as quiet as Steve Bruce prayed it would be. Interest in City's key players has not been forthcoming and the rumour mill hasn't been as ridiculous as it was in the summer. The gaffer will brace himself for questions though after Talksport claimed today that Crystal Palace want midfielder/forward Mo Diame. The big Senegalese is just hitting his stride again after a dip in form following his return from a long injury lay-off.

Rival news: A rivals/ex-tiger double here. Gaston Ramirez, who spent last season impressing no-one on loan at the KC, joined Middlesbrough for the rest of the season. Derby County added another body to their expensively assembled squad with the signing of Blackburn left-back Markus Olsson for an undisclosed fee. The other side in the top five of the Championship, Burnley, snapped up Beverley born ex-England goalkeeper Paul Robinson on a short term deal.

Ex-Tiger news: Striker Karim Rossi, who spent the 2014/15 season in The Tigers' U21 swuad after joining from Stoke has left Italian Serie B side Spezia to join FC Lugano of Switzerland. That makes four clubs in four countries for Karim inside 18 months.

The odds on Nick Powell joining City on loan dropped drastically after Twitter rumours yesterday. The midfielder was the hottest property in English football when he joined Manchester United from Crewe almost four years ago but hasn't developed at Old Trafford and loan spells at Wigan and Leicester have been a flop. Two years ago, he'd have been an exciting signing for The Tigers. Now you'd just ask "Why?"