City survived a second half Reading fight back to earn Grant McCann a first win as Tigers’ manager, but it was far too close for comfort. 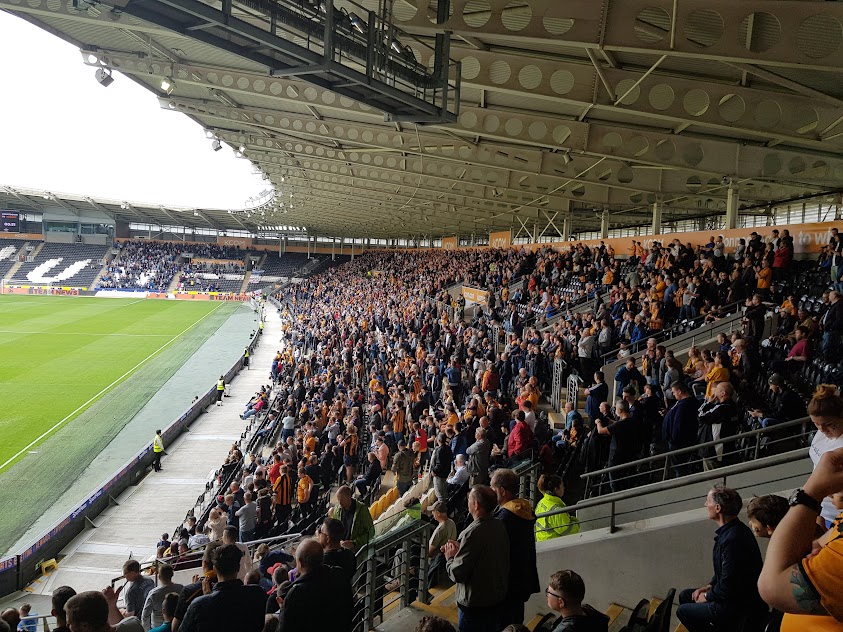 Reading have an eclectic side mixing some local youngsters with a bunch of foreign players, many signed on loan, and the always impressive John Swift holding things together in midfield. They looked like strangers for most of the first half but there was obvious talent in the side and when (if) they gel, they’ll be effective. They don’t lack pace and City did well to more than cope with it for the first hour.

It was a grey and blustery but still somewhat day. The wickedness of the wind demonstrated in the first half when a man’s hat blew off in the East Stand and flew back about 20 rows. The East Stand is now at least well enough populated that there were people there to throw it back.

The City side looked similar to last season with two holding midfielders but lined up subtly different with Batty and Irvine behind Eaves allowing them to get involved higher up the pitch when we had the ball and to press on without it. More than once, Batty was the furthest man forward chasing down the defenders and goalkeeper. That change was demonstrated clearly in the moment Eaves pounced on a dozing defender to win the ball back and Grosicki played in Batty whose shot deflected just wide.

It was Eaves first start after his move from Gillingham and he was impressive in his movement and hold-up play. He tired in the second half, his lack of pre-season showing, but did enough to suggest he’ll be very useful to those around him. City’s first site of goal game when he neatly headed Stewart’s lofted ball into Bowen’s path but the full back nicked it off his toe.

City’s bright start was rewarded when Bowen opened the scoring after just 6 minutes. Burke intercepted a through ball, it fell for Irvine and he played a 1-2-3-4 with Grosicki down the left-hand side. Grosicki cut into the penalty area and surprised the keeper with a near post shot that squirmed through him and Bowen tapped it in from inches.

We were then denied a blatant penalty when Yiadom handled Grosicki’s cross – VAR would have given it! – before making it 2-0 through an Irvine header from Bowen’s cross after good work from Lichaj on the right.

It stayed that way into half time via two let offs. Lucas Joao, a new signing from Sheffield Wednesday, hit the post when in on Long and then De Wijs was lucky to only pick up a yellow card after piling recklessly into Boye.

The second half started comfortably enough with half chances for Bowen and De Wijs. Yiadom could also have seen red after swinging an arm in Irvine’s face but the ref saw it as a Yellow to the chagrin of the East Stand. The game then swung Reading’s way. Meite latched on to a long ball and made sure he fell over the approaching Long. It wasn’t a penalty but the danger wasn’t heeded and a similar switch into their right channel caught the City defence narrow. Joao took it down nicely, waltzed inside Kingsley and buried it for 2-1. Kingsley is still the weakest link in the City side. His late yellow card for hacking Yiadom down twice came because he got beaten far too easily.

Toral and Dicko replaced Batty and the tiring Eaves, who’d given the ball away poorly in the lead up to their goal, but were as effective as a British prime minister during EU exit talks. Reading already had Pele on and then introduced Puscas at half time. He was the next to get in on our left from a terrifyingly simple ball and Long came to the rescue to smother. Honeyman was the next City debutant, replacing Grosicki, and his first involvement was to try and save a throw-in in our half putting them one on one with Kingsley. A ridiculous decision but in-keeping with our second half.

We rode out the storm in the last 10-15 minutes and could have made it very comfortable through a wicked curling Bowen strike that fell just wide. There was one last scare as an Adam free-kick dropped in the box and was poked against the bar.

So, a good start for Grant McCann whose desire to press high and play forward quickly was demonstrably effective in a very good first half but the lack of the fitness and personnel to carry it out for the whole game was in evidence in the second. That will hopefully improve as the new additions are integrated into his squad over the coming weeks. In all, it was an encouraging start. It’s a real shame only ten thousand fans saw it.

Man of the match: Kevin Stewart.