Hull City start the 2015/16 Championship season without having lifted the gloom left by May’s needless relegation. 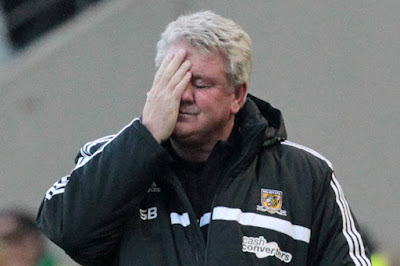 In an era where football managers enjoy less job security than Greek stockbrokers, Steve Bruce can consider himself particularly lucky to still be in a job. For their many flaws, the support afforded Bruce by the Allams has always been first class. Their decision to continue to back the manager after relegation is admiral and given Bruce’s record in his last few spells in the second tier is probably just about the right one.

Bruce should be walking on egg shells though. He was massively culpable for relegation with his erratic signing policy. Additions all came at a huge cost and with each one the togetherness in the dressing room, once lauded by Bruce, was eroded. He must now deliver another team capable of challenging at the top end of the table.

The fall-out from relegation has been felt time and again since the end of the season with the loss of some outstanding personalities. Amongst those expected to be released at the end of their contracts where the surprising names of Paul McShane and Liam Rosenior. Bruce blamed a need to cut the budget for their exits but it remains a baffling decision. Not only because of their ability on the pitch but their influence off it.

Stephen Quinn and Tom Ince also left the club, for Reading and Derby respectively, despite efforts to keep them. Bruce was upset that Ince was allowed to leave because a clause was inserted into his loan deal with The Rams last season but the manager’s attitude to both players is as responsible as anything for them seeking pastures new. Neither player was made to feel important when the club was in the Premier League. Bruce preferred others then.

The saddest departures have been those of James Chester (WBA £8m) and Robbie Brady (Norwich £7m). The club have done well to recoup good fees for players who deserve to be playing in the Premier League and had contracts running out but the need to sell players of their quality with years ahead of them at the top level just hammers home how costly the carelessness of last season was.

Despite “the exodus” bringing in close to £20m in transfer fees there is still some very obvious belt-tightening going on. Ehab Allam recently spoke of his concerns over the financial fair play rules so even with the £24m parachute payments on top of the sales – the owners are obviously still worried about meeting the costs over the course of the season.

As a result, player recruitment was very slow to start. In spite of claims from both manager and owners that bouncing back into the Premier League was the target, balancing the books has been the very clear priority. Four new players eventually arrived. Sam Clucas joined from Chesterfield for about £1.3m. He’s a very sensible signing who could fill the gap left by Brady for a modest outlay. He’s only going to get better and has the attitude and work rate that Bruce’s original success here was built on.

Ryan Taylor is the most dubious of the signings so far. He’s almost thirty-one years old and has missed nearly three years of football with two serious knee injuries. He has quality and is, by all accounts, a good guy but he’s an odd signing from a club who couldn’t afford to keep Liam Rosenior.

Bruce has also signed defender/defensive midfielder Issac Hayden and striker Chuba Akpom on loan from Arsenal. They are just and almost twenty. Both are talented young players with a great footballing education who could excel in the Championship with good management.

Pre-season has been fairly low key for The Tigers. Because of the constant changes in personnel in the squad, it’s never felt like a manager bedding in a team but more a case of the players just playing to be ready to start the season – for us or someone else. It has seen City line-up with a 4-4-2 formation in most games, a bit of a departure from Bruce’s favoured 3-5-2. We still have the players to effectively play the wing-back system so it looks like it’s born out of desire rather than necessity.

If nothing else, it will be nice to see Bruce putting together a “Plan B” that has been sorely missing in the past two seasons. Both systems are a little rigid though. We have the players to effectively play 4-2-3-1 with attacking full-backs and dynamic players supporting a lone front man. I do think that would make the best use of the players at Bruce’s disposal.

The defence looks the strongest unit in the squad (perhaps with the not-so-small exception of the goalkeepers) as it has been since Bruce arrived in 2012. Even with the losses of Chester, McShane and Rosenior, we retain three good centre-halves alongside Michael Dawson who will be an excellent leader. Bruce also has two attacking full backs in Ahmed Elmohamady and Andy Robertson and the experience of Ryan Taylor to call on. In terms of squad depth, he’s desperately short of another left back.

Midfield was a real problem area last season with the ex-Tottenham duo of Tom Huddlestone and Jake Livermore producing performances of the class and poise of the average Deal Or No Deal contestant. Livermore’s future is now “up in the air” to say the least as the club still await news of his punishment after a failed drug test. The same can be said of long term injury absentees Robert Snodgrass and Mohamed Diame. They are expected back at some point in the Autumn but when they’ll be back to 100% and ready for a bruising Championship campaign is anyone’s guess? At least there is no chance of anyone buying them so every cloud and all that…

Unless Tom Huddlestone finds the form and fitness that has utterly deserted him in the last eighteen months then the pressure is going to fall onto the shoulders of the exuberant David Meyler and young Hayden. Neither has Huddlestone’s class in possession but both probably have grandmothers who could out-run him at the moment.

On to Steve Bruce’s favourite topic: Strikers. In his time in Hull he’s specialised in buying front players who don’t score goals. The only exceptions to that rule are players who do know how to hit a cow’s arse with a banjo but are always injured like Sone Aluko in 2012/13 and Nikica Jelavic last year.

Aluko has struggled for two years in the Premier League to make the team and to be effective once he has but he’s shown some signs that he may well be back to the sort of form that made him the club’s key player before he was injured in late 2012. That is definitely important because at the moment Aluko and Chuba Akpom are the only forwards guaranteed to be at the KC Stadium in Spetember.

It looks set to be another busy August for the manager and owners. Not only are there five league games and a League Cup tie at Accrington to negotiate but also the challenge of selling (or keeping?) three strikers in Jelavic, Dame N’Doye and Abel Hernandez and the need to replenish a soon-to-be very depleted squad.

City have had several bids rejected for Brentford striker Andre Gray, have a deal done that they’re stalling on for his team mate Moses Odubajo and seemingly remain interested in Scotland winger Shaun Maloney – currently of Chicago Fire in the MLS. They may not be the only additions just as the attacking trio may not be the only departures. It promises to be a hectic month and one can only pray that we go about it with some of the sense that was completely missing a year ago when our business resembled a pie-eyed lottery winner at the Harrods sale.

City were favourites for promotion earlier in the summer but have slipped below Derby County and Middlesbrough in the markets now. That seems more than fair as Derby have added strength to an already impressive unit while Boro, who went mighty close in May, have spent big on Stewart Downing. He’s by far the best player in the league this season.

Wolves have plenty of momentum after a strong finish to last season, QPR have invested in their squad again, Burnley have retained the majority of the players who got them promoted two years ago, Leeds and Sheffield Wednesday are showing ambition and Mick McCarthy continues to over-achieve at Ipswich.

The pot of gold at the end of the rainbow is monumental this season and it’s created the most competitive Championship I can remember. Hull City have not rebuilt a squad that looks capable of automatic promotion. The play-offs are possible, perhaps even probable but it will take something special before Tuesday September 1st for that “favourites” tag to look anything other than silly.