In this series of blogs, I'll pick the Top 10 Players, Games and Goals from the 10 years at the KC Stadium and will throw in a variety of top 10 lists and boring facts! This is number seven in the series and number four in the countdown: 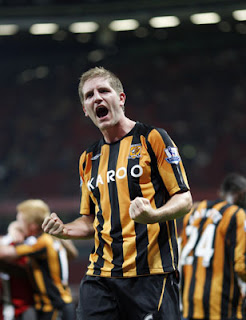 I re-published the piece below in August, If/when you read it, you'll know exactly why Turner features this high on a list of players who've made such a great contribution to the Tigers. Turner was, in my opinion, the best defender we'd ever had. He still is. It was a pleasure to watch his development. For six months, he was out of his depth. We couldn't have given him away. Two and a half years later we were all up in arms that he was sold for well below his true value which must have been £6m+ at that time. His progress was remarkable. It's a real shame he never picked up an England cap while he was at the KC. We've waited a long time for a proper England international and we continue to wait. Turner's contribution to the promotion season of 2007/08 and the survive-by-the-skin-of-our-teeth season of 2008/09 is probably greater than that of any other Tiger in history over two seasons. There are only two reasons why he isn't top of this list. Firstly, because there are a couple of players who've contributed massively to Hull City over 8+ years. Secondly because he's a defender and everyone knows they're not real footballers!

There's only one Michael Turner!


In many ways, the 2009/10 season was a bit of a disaster for Hull City. What should have been an exciting second ever season in the top flight of English football never really got started and then tailed off badly amidst fears of a looming financial crisis. We had two useless managers, one tending to the team, the other tending to his garden. For our green fingered gaffer, Phil Brown, this was the last great day he enjoyed with the Tigers.

City sat in the bottom three of the Premier League but were within one win of 5 or 6 other teams and were coming off a morale boosting draw against eventual champions, Chelsea. Man City weren’t quite at that level, they’d finish fifth, but featured enough talent to worry most teams.  The Tigers side that day cost £8.8m. Manchester City’s starting eleven cost an estimated £139m (no-one knows what Carlos Tevez cost). That’s more than three times what it cost to build the stadium we’re so proud of. If anyone was scouting the boys in blue that day, they wouldn’t have taken half of them for free. City were magnificent. They didn’t let them settle. Altidore led from the front putting in the only performance of his loan spell that came anywhere close to matching his effort for the USA against Italy that brought him so much attention the previous summer. He bullied Boyata who was lost from the first minute to the last. It was fitting that he opened the scoring on the half hour, collecting Hesselink’s lay-off and curling a low shot into the bottom corner. I hoped it would be the first of many memorable moments for Jozy in a City shirt. Unfortunately, it’s one of only two. The other, headbutting Alan Hutton, isn’t necessarily anything to be proud of!

The expected onslaught from Manchester City never really materialised. Even in the closing stages as they chased the game they failed to really test Bo Myhill. The impenetrable wall of Steven Mouyokolo and Anthony Gardner stood firm in front of Bo, repelling everything and ensuring the £50m+ partnership of Adebayor and Tevez came in somewhere close to the KC Stadium beer in the value for money stakes. It’s not even funny to think that six months later, Gardner would be made to look distinctly second class himself by Millwall and Donny Rovers. Adebayor grabbed Man City’s consolation goal, stabbing in after a corner wasn’t cleared but City held on doggedly for a fully deserved victory. 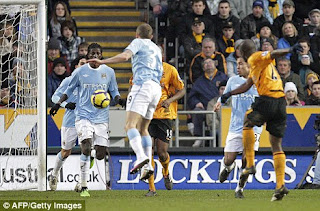 What turned out to be the winning goal came after a 54 minutes and was another that was thoroughly deserved on the day. George Boateng didn’t exactly set the world alight with the Tigers, never producing the rampaging performances of his time at Aston Villa and falling out of favour with Phil Brown several times. The previous game against Chelsea had been by far his best performance in black and amber and then this game surpassed even that. Not only did he cover every blade of grass, battle for every ball, harass and destroy, encourage and cajole but he produced a magnificent volley with his left foot to, fittingly, win the game for City. This goes down as our finest ever home win in the Premier League and it was earned, and deserved, against a team with money to burn who’d be champions of England two years later. We only one more Premier League game against a second string Fulham side7 weeks later. If the Hull City that took on Manchester City that afternoon had turned up for 38 games, we’d still be a Premier League club now!

This is a super goal but you know that. No Hull City fan will ever forget this goal. Technically it's brilliant, a delightful dipping, fizzing shot into the bottom corner. It's the historical significance which makes it even better. A club has waited 104 years to taste top flight football. The day finally arrives. The excitement  the expectation, the desperation to impress with the eyes of the world watching. Along comes this goal. Scored for little old Hull City by a Brazilian international magician. You can wake up now.